Have you ever come across an amazing deal on bell peppers and wondered “Can you freeze peppers”?

Well feel free to stock up, because we’re showing you everything you need to know about how to freeze peppers, and save money on groceries! 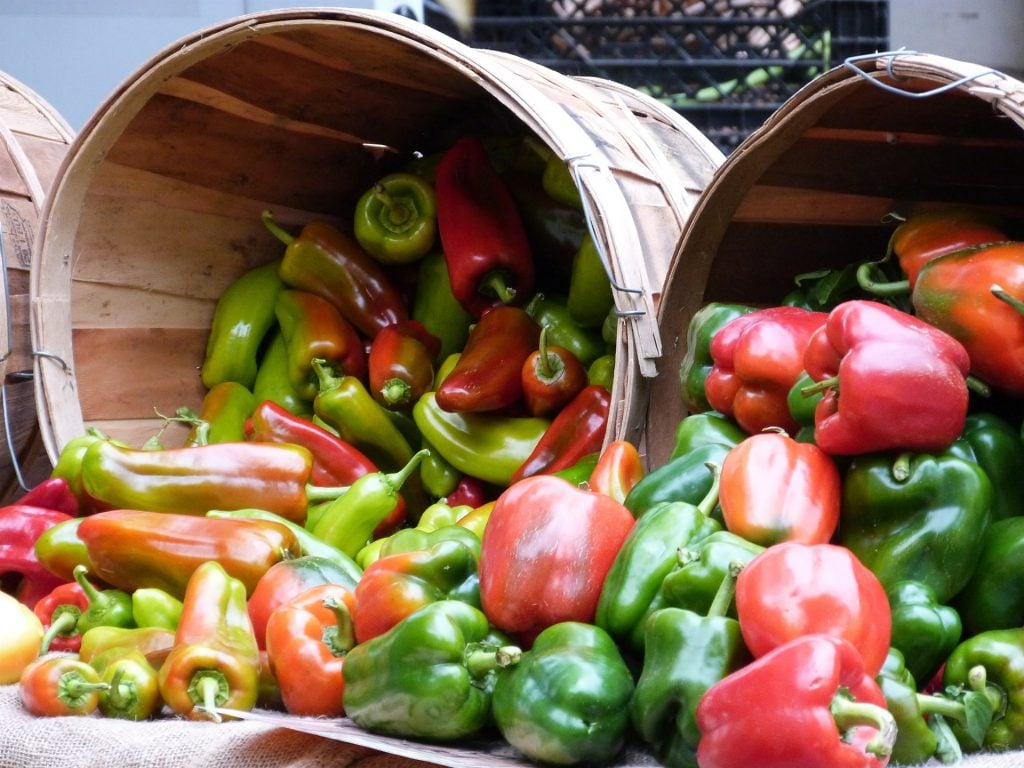 Soon we’ll be gazing at piles of gorgeous fresh produce at every grocery store, farmer’s market and roadside stand we pass, or, if we’re lucky – in our own backyards.

If you’re anything like us, we eat a TON of fresh produce in the summer.  Prices are low, the taste is great and everything is so fresh!

But how can we enjoy the benefits of those great summer prices through the rest of the year?

Easy!   Stock up now and preserve for later…. and the easiest way to preserve?

A few years ago I was scouring the Atlantic Superstore flyer one summer day when I saw a sale on large quantity summer produce – crates of tomatoes, pickling cucumbers, jalapenos and, what really caught my eye – 1/2 bushels of red bell peppers on sale for around $12!

I love bell peppers and we use a lot of them, but they can be EXPENSIVE where we live, especially if you need to pick them up for a recipe when they’re not on sale.

“Can you freeze peppers,” I wondered to myself?  Hmmm…..

I bought a 1/2 bushel and decided to find out!

I didn’t really know how big a half bushel was, but it turns out that it was 20-30 peppers!  Considering that 1 bell pepper at regular price (no sale) is probably around $4-5 here, the bulk deal was incredible value!

I took the peppers home and spent an hour prepping them for the freezer.  We had frozen peppers to use for almost the entire year, for a fraction of the cost of buying fresh!

Now, I wouldn’t use frozen peppers in a salad, but for cooking they’re perfect and you’d pretty much never know the difference!

We used them on pizza, nachos, in spaghetti sauce, chili, soups, and pretty much any other recipe that requires you to cook them anyway.

Because they’re already seeded, it’s super easy to use them too!  Just take out the amount you need for your recipe, run them under warm water and then slice, dice or chop however you like!

How to Freeze Peppers – Step-by-Step Instructions 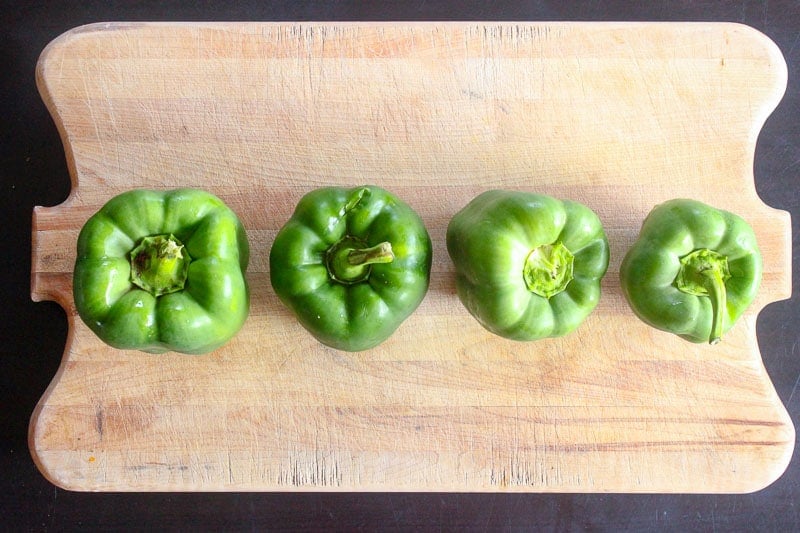 I picked up these peppers on an amazing sale and wanted to freeze them to use later. 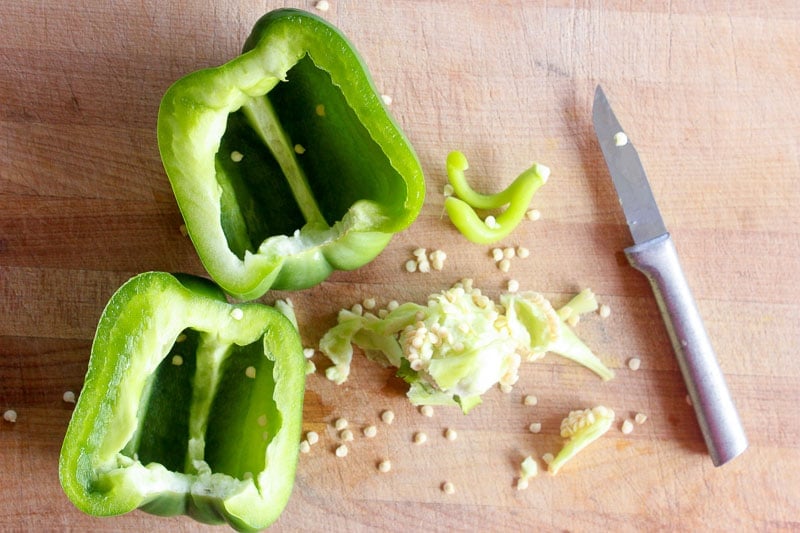 Slice the peppers in half and remove the core, larger ribs and seeds.  Give them a little wash under clean, cold water. 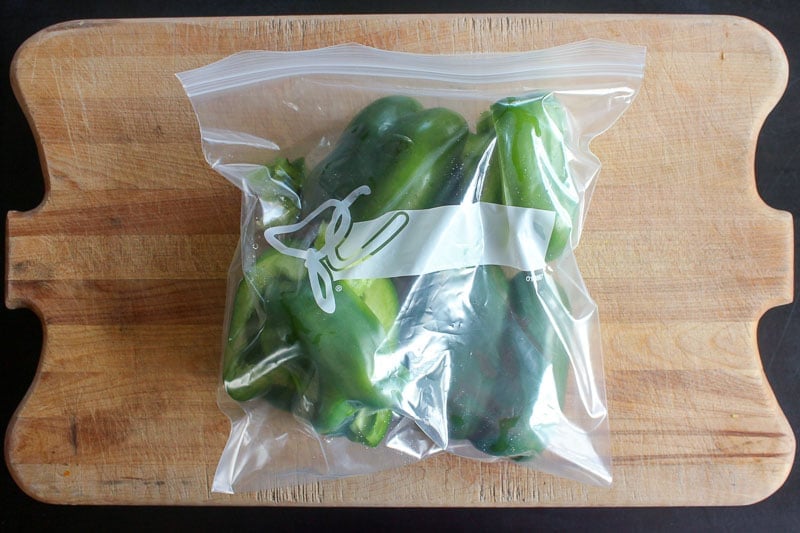 Stuff the peppers into a freezer bag (no need to freeze individually first) and throw them in your freezer.  I would say you could keep them frozen for a year and not notice any difference in quality.

To use them, just run the pepper halves under warm water and cut with a sharp knife.

Do I have to blanch peppers before I freeze them?

No!  Most vegetables need to be blanched before you can freeze them and have them still be good quality when you thaw them.  That’s the beauty of freezing peppers – no need to blanch!

Can I freeze jalapeno peppers or other hot peppers?

Yes!  We usually grow a few different kinds of hot peppers in our garden and always rinse them, dry them and freeze them whole in freezer bags.

Because they’re thinner you can pretty much chop them while they’re still frozen (follow normal hot pepper precautions – like wearing gloves).

Can I freeze whole bell peppers?

Well… I would say probably.  I haven’t tried it with bell peppers, but as I said above, we do this all the time with smaller hot peppers and it works great.

It might be less convenient to thaw them than it is to thaw pepper halves, though, and they will take up more space in your freezer because they can’t really nestle into each other.

If you try it let me know how it goes!

140 shares
140 shares
We use cookies to ensure that we give you the best experience on our website. If you continue to use this site we will assume that you are happy with it.Ok