This Smoky Bacon Potato Soup is the perfect comfort food for cool weather.  It’s cozy and smoky from the bacon and smoked paprika, and hearty and savory from the potatoes, onions and garlic.  Curl up with a bowl of this soup tonight. 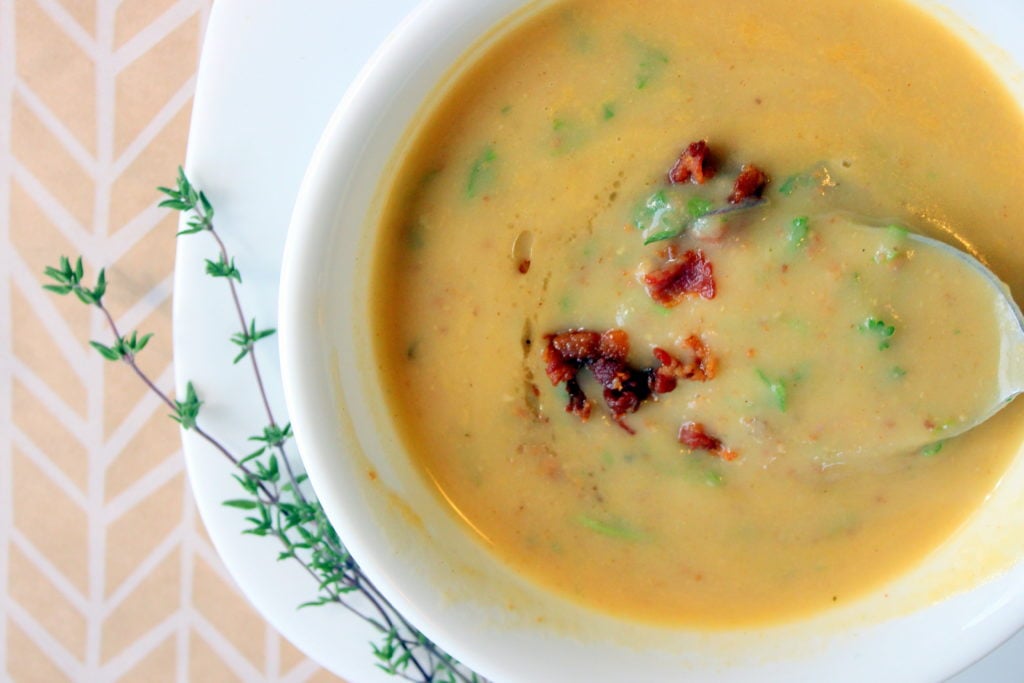 Our meals have taken a distinct shift into the “cozy and hearty” category, and nothing illustrates this better than this smoky bacon potato soup.

It’s creamy, smoky and filling enough to stand on its own, especially if you pair it with a loaf of crusty bread and some salty butter.  Add this soup to your list of favourite fall and winter soups!

Almost as good is knowing that this is a very inexpensive recipe to make.

A craving for potato leek soup sent me brainstorming about a cheaper alternative (leeks are super expensive where I live!!!).

Potatoes, onions and garlic aren’t expensive this time of year and the recipe only uses half a package of bacon (whatever half a package amounts to where you live is fine).  Or you can omit it for a vegetarian potato soup.

There is some cream but you can easily substitute that with milk or evaporated milk if that’s what you have handy.

If you use Better Than Bouillon to make your chicken broth like I do, this is a pretty inexpensive way to fill up on a cool fall night.

(PS – check out our super helpful stocking up posts: Stock Your Pantry on a Dime , Stock Your Freezer on a Dime, and Stock your Fridge on a Dime.) 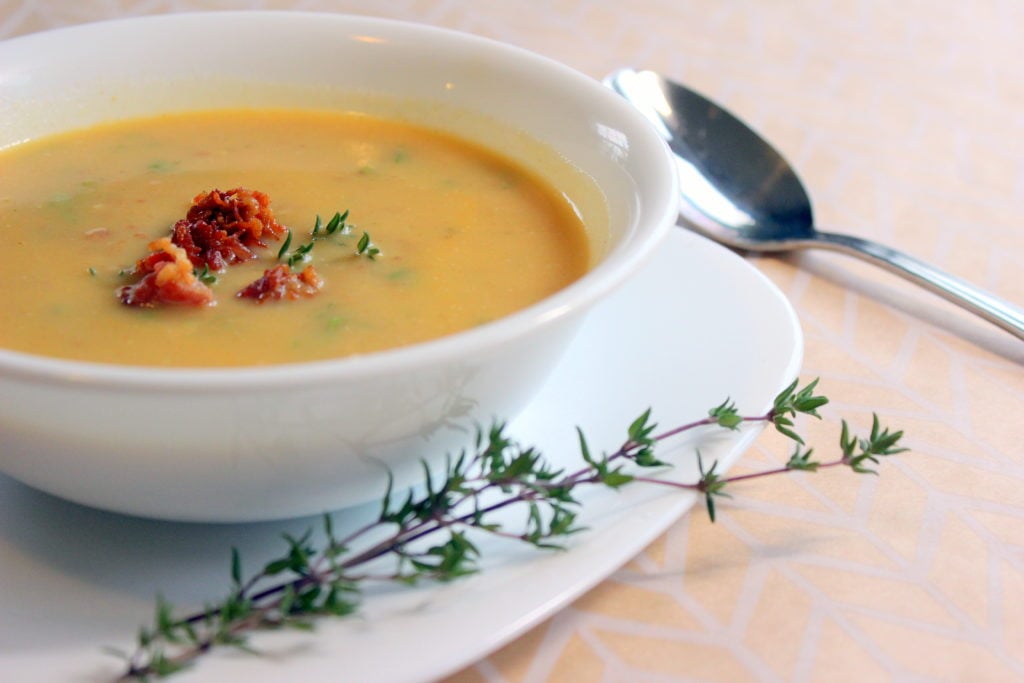 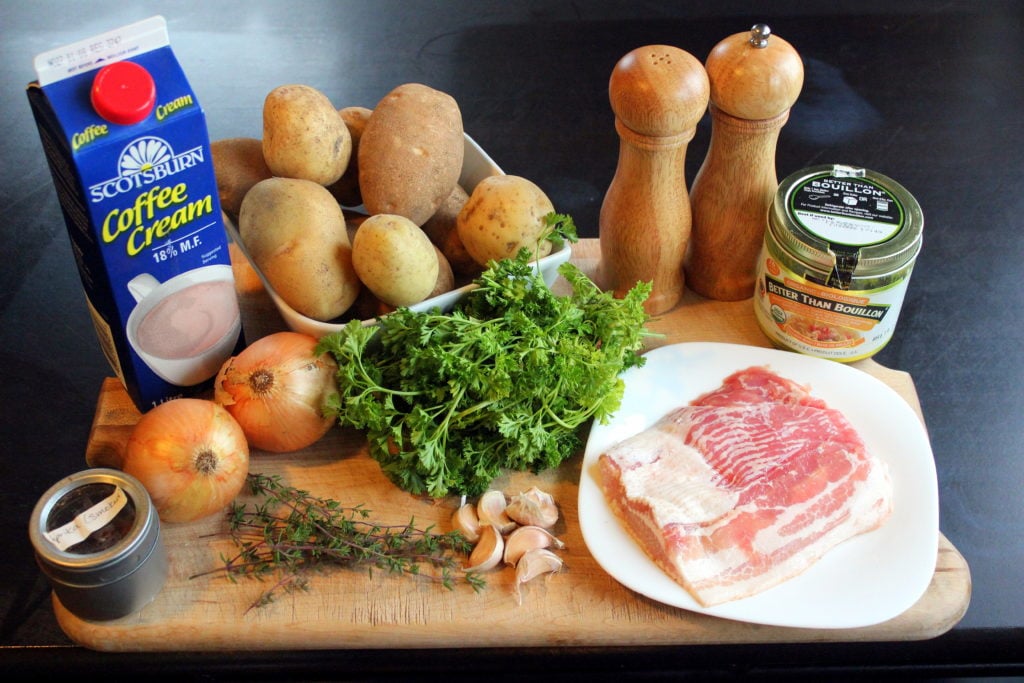 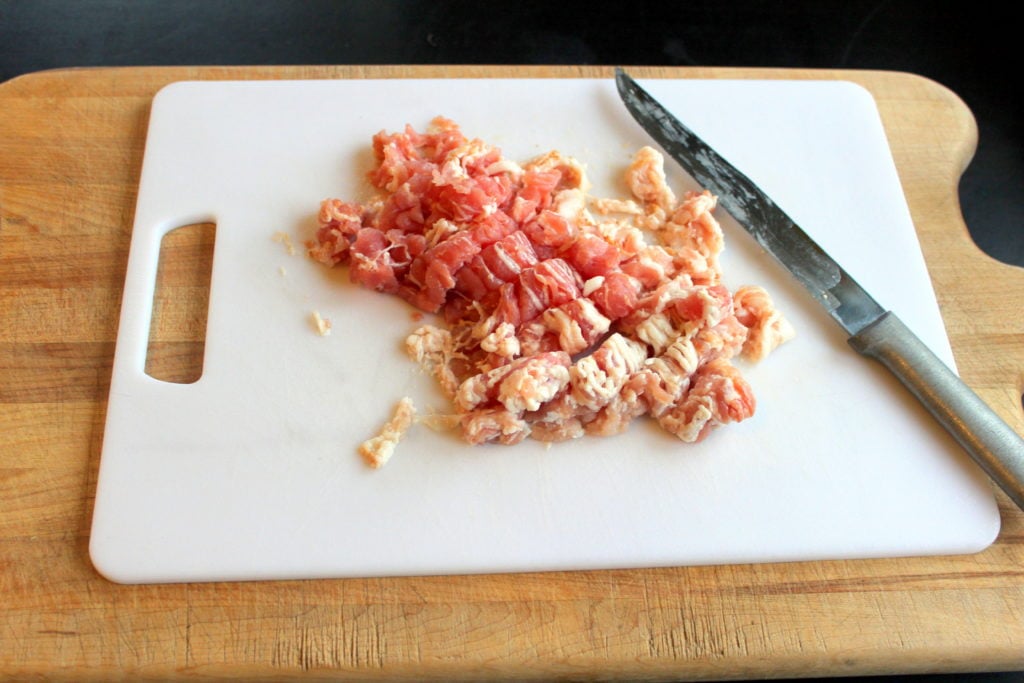 Chop half a package (roughly half a pound) of bacon into small pieces.  Fry in large pot over medium-high heat until crispy.

Tip:  (For vegetarian option, omit the bacon and start with the next step, but using 2 tbsp olive oil or butter to saute vegetables in.)

Dice two onions into fairly small pieces.  Mince five cloves of garlic and around 1 teaspoon of fresh thyme (or you can use 1/2 teaspoon of dried thyme). 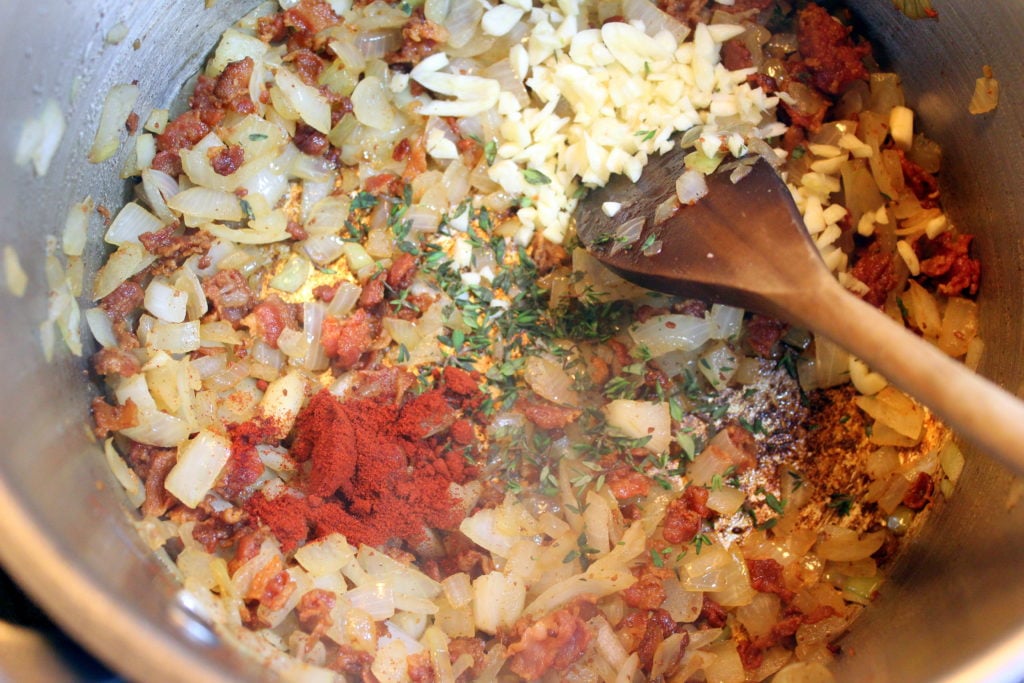 Drain off all but about 2 tbsp of bacon grease.  Turn heat to low, add diced onions and cook, stirring often until they are soft and golden.  Then add garlic, thyme and 1 teaspoon of smoked paprika.  Cook briefly.

Tip:  Smoked paprika is a fantastic way to add smoky, hearty flavour to food (especially if you opt to make this soup vegetarian and lose the smokiness of the bacon). 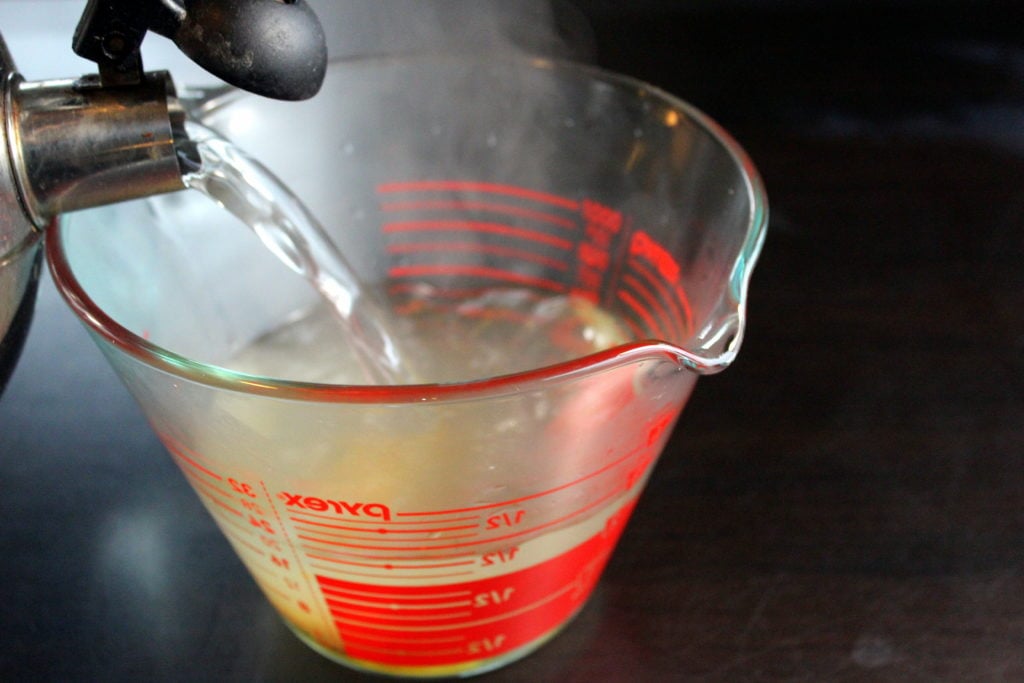 If you’re using Better Than Bouillon (recommended), mix it with boiling water according to the package directions, to make six cups of broth.

Tip: I REALLY love Better Than Bouillon and find it is such an affordable way to have lovely chicken broth on-hand all the time, especially without wasting partial cartons when a recipe only calls for a small amount. 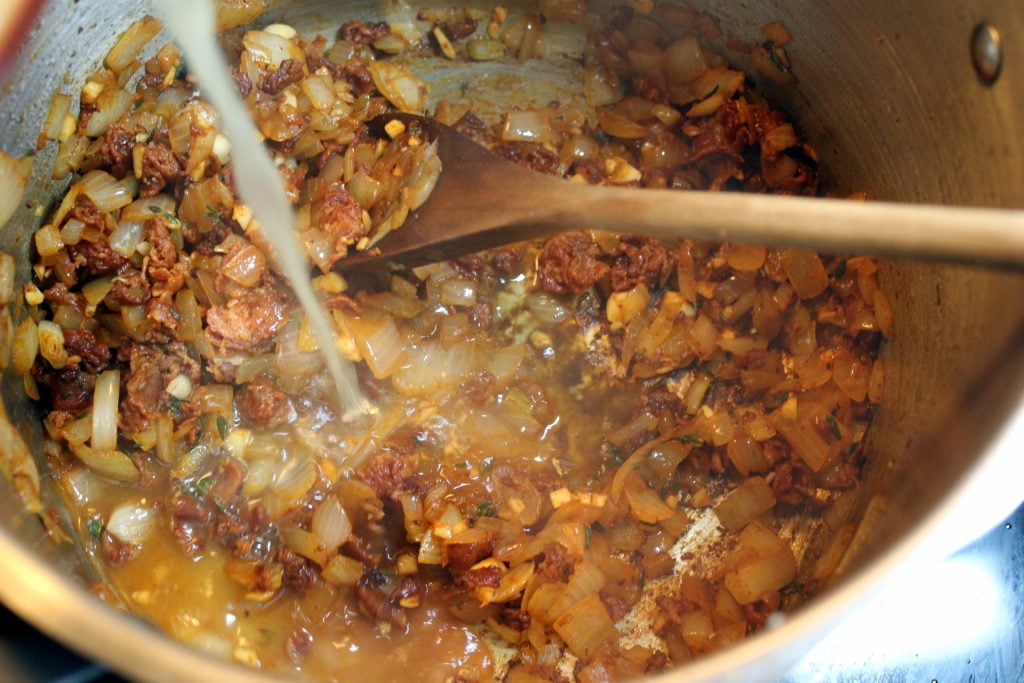 Add a small amount of broth to the pot and use a wooden spoon to scrape all the browned bits off the bottom of the pot.

Tip:  The bits on the bottom of the pot are the FLAVOUR friends!  Don’t let it go to waste!  Once you’ve reincorporated all that deliciousness, add the rest of your broth. 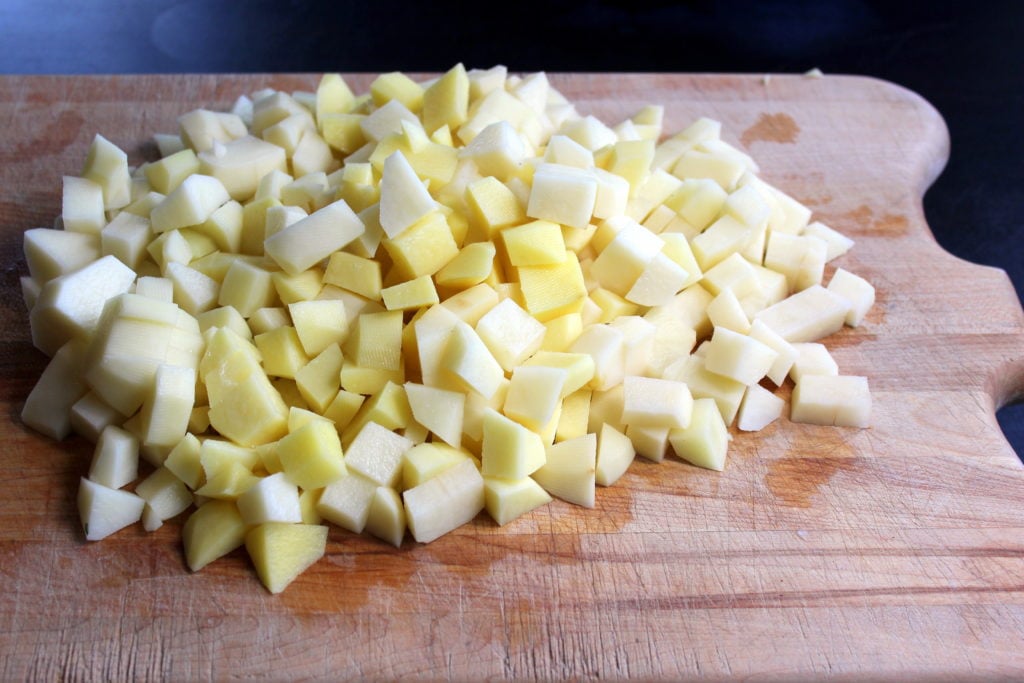 Meanwhile, peel and chop your three pounds of potatoes and add them to the pot.  Bring to a boil, reduce heat and simmer until potatoes are tender, 10-15 minutes. 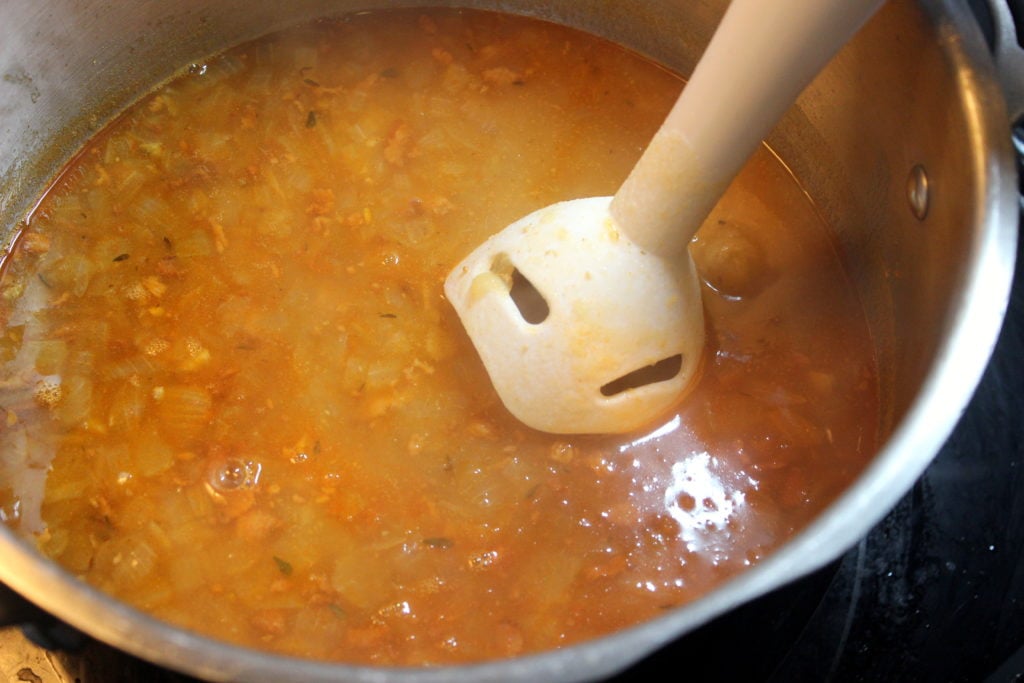 Use an immersion blender (or other blending device – discussed in text recipe, above) to puree the soup. 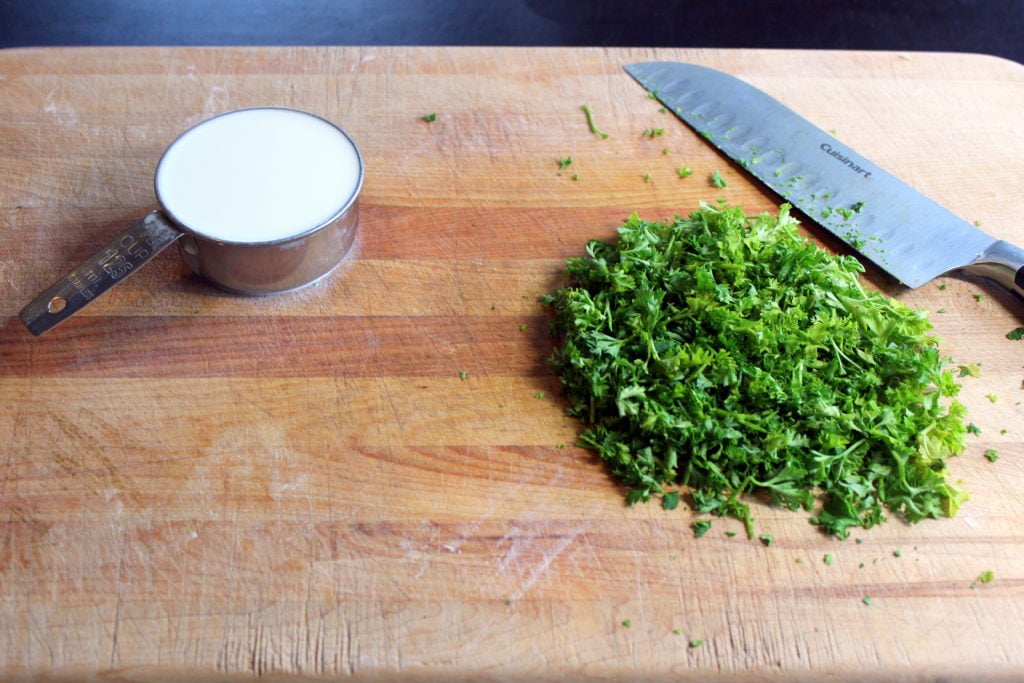 Add 1/2 cup of cream and 1 cup of chopped parsley.  (You could also use milk or evaporated milk and 1/2 cup of dried parsley).  Serve hot, with garnishes if desired.

I like loaded potato soup.  What can I use for toppings on my soup?

Some delicious ideas for toppings on potato soup are crumbled bacon, chives or green onions, shredded cheddar cheese, parsley, goat cheese, or (if you happen to have this, it’s AMAZING) truffle oil.

How do you fix bland potato soup?

If you’ve opted to make the soup vegetarian: you should double the smoked paprika and salt to make up for the flavour you’ll miss from bacon and chicken broth.

Is this potato bacon soup healthy?

The answers to this question will vary.  Personally I think it’s reasonably healthy, since half a package of bacon and half a cup of cream are the only “unhealthy” ingredients and they are divided between all the servings.

Some people avoid potatoes because of their starch content but they contain many vitamins and minerals and are very filling.

How can I make my potato soup thicker?

If you know early on in the process that you want to end up with VERY thick soup, add a roux to your onions and bacon before deglazing the pot with your chicken broth.

To make a roux: mix 2 tablespoons of flour with just enough cool water to whisk it smoothly, then add it to the onion mixture and cook, stirring, for a minute before you start to slowly add the broth.

Tip: If you don’t want to use flour because of the gluten, use 1 tablespoon of cornstarch and follow the same process.

If you only discover at the end that you want to thicken your soup, make the roux but stir vigorously as you mix it into the finished soup, so that lumps of flour don’t form. 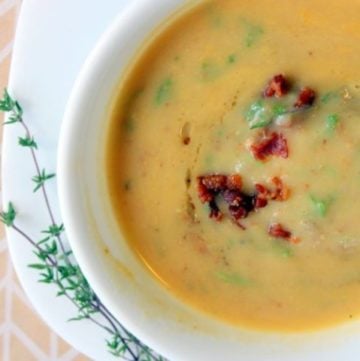 * To make this soup vegetarian, omit the bacon.  Start by sauteing onions and garlic in 2 tbsp of either olive oil or butter.  Double the amount of salt and smoked paprika, and use vegetable broth instead of chicken.  All other instructions stay the same.